Ouid is slang for the word weed. This name originates from the french pronunciation of “oui” which means “yes” in french. When you pronounce it “wee” and add a “d” the word now sounds like “weed”. Or, as most people know it, Ouid is a Tiktok term turned Viral.

Most people started seeing this term used across social media platforms like Tiktok and Instagram in 2020 and 2021. Ouid was used as a way to hide the actual meaning behind a post or video on platforms that normally censor “weed” content.

Teenagers always find a way to rebel through a loophole and they did it again with this term. Ouid is still widely used but the platforms have grown to understand its meaning and remove the content from the platform. Still, people find ways to rip and blend the original word into new things to prevent the platforms from censoring all cannabis content.

Slang term for weed. Ouid was first used by TikTokers as a way to hide from the platform’s censorship. #ouid

Ouid Used in a Sentence:

If you’ve never tried this ouid, you will have the most munchies of your entire life after smoking it. 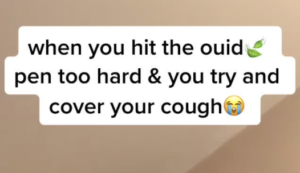 Ouid will continue to evolve as a way to beat platform censorship. Along the way it ropes in millions of people educating them on the actual meaning.

Almost like a viral marketing campaign, words that get morphed into new meanings are remembered at a higher rate, increasing the rate at which it spreads and is talked about by the masses. For example, oui’d started getting used to replace ouid as a way to beat the platforms censorship after they caught on to the original.

Even older adults started to question the meaning of Ouid as they began seeing it everywhere. That’s when you know it has really spread! As it spreads the usefulness of the term decreases for those that created it, but increases for those that caught on late. You won’t see as many videos and social posts using it as a hashtag anymore.

Ouid was mainly used as a hashtag to group these posts into one category. This made it incredibly easy for people to sort and find the entire section of cannabis without struggling to search through the platforms attempting to keep cannabis off of them.

Sometimes teenagers come up with genius ideas. If you can pick up on these trends early enough, there’s a lot to capitalize on as a brand. This is how the hashtag is used in posts.

If you’re interested in ouid and want to learn more about it check out our other posts. We have tons of tutorial content all around the ouid space.

8 Ways to Sober Up From Being Too High

We’ve all been there: you lit the perfect joint, took a deliciously, expertly-timed dab, munched on an artisanal edible. Then, all of sudden those fuzzy feelings feel prickly, your laughter turns to panting, and you’re thinking, “dude, am I dead?” No, it’s just...

Can You Mail Weed or Edibles Legally?

The United States Postal Service has served the American people for almost 250 years as one of the oldest and most venerable US institutions. You’ll recognize agency members by those timeless navy blue shorts and the eagle logo on the side of their trucks. The...

Hello Stargazers, and welcome to The Season of The Twins! Strains for Gemini season is part of our new monthly column where you can find the perfect strains to match your elemental sign and a strain that pairs perfectly with the current zodiac season. The...

The Haymaker is Leafly Senior Editor Bruce Barcott’s opinion column on cannabis politics and culture. Last night’s Democratic Senate primary in Pennsylvania wasn’t an election. It was an ass kicking. A pasting. A posterizing slam dunk. And cannabis legalization...

Los Angeles investors can open up shop as Miami City ends years-long silent ban on medical marijuana providers There are over 425 dispensaries spread across the state of Florida. Somehow, Miami has none. That should change soon. Last week, a 3-2 vote from Miami...

West Coast cannabis flower smokers: Prep your lungs for a long, hot, intense summer This May, Kush Mints went Platinum. Chem Dog offspring like GMOG, Dawg Breath, and The Judge intimidate with both their bark and bite. And Archive Seed Bank takes your garden...